Once again The Olive Press (TOP) and Wairarapa olive growers have cleaned up at the annual Olives NZ Awards, announced on 13 October 2018. Best Flavoured Oil went to The Olive Press (that’s us!) who also took out Best Processor.

Loopline Olives is owned by Mark and Kate Bunny. It is a medium sized grove of approximately 900 trees established in 2001. This is the 3rd occasion that Loopline Olives has won the supreme award, having taken out the top award in 2014 and 2017. They have been consistent medal winners at other previous Awards.

Here’s Bruce McCallum’s summary of how we did.

TOTAL MEDALS AWARDED: 109; we pressed 29 (27%). Last year 95; we pressed 36 (38%). The thing I notice this year is the total number of medals is up, but of the total, 50 were from Auckland/Northland/South Island – this is a large increase on last year – I think because Auckland and Northland were pretty much wiped out last year by weather and disease. The quality across the board appears to have been very high this year. In the above categories where our %ages were lower, our numbers were up. The lower %ages is a reflection of higher numbers entered from Auckland/Northland/South Island.

We still dominate at the top end, where it really counts in this competition. Thus BEST PROCESSOR, fifth year on the trot.

The Olive Press Ltd has once again won “Best Processor” in the annual Olives New Zealand awards. This is the third year running that TOP has achieved this result.

In another major coup, the company’s flagship oil brand, Pressed Gold, has won “Best in Category” in its first showing at the awards.

As well as these achievements, Wairarapa producers were very highly represented in the overall results, taking out a large number of the major gongs.

The full list of 2016 awards (as well as previous years) can be seen here. VIPs at the opening of our new facility in Greytown

Our new pressing facility and retail shop in Arbor Place, Greytown was opened by the Minister for Primary Industries, Hon Nathan Guy, on Sunday 25 May 2015.

Other VIPs in attendance were the Minister’s family, along with MP for Wairarapa, Alastair Scott, Olives NZ President Andrew Taylor and Chair of Greytown’s Papawai Marae, Paora Ammunson.

A large turnout of local growers as well as visitors from Hawke’s Bay and the Kapiti Coast were treated to a ‘live’ demonstration of TOP’s press, from loading of freshly-picked fruit through to the finished product from the separator.

Olives NZ coordinated a series of visits in New Zealand by two eminent American professors who are on international sabbatical studying the chemistry and health benefits of olive oil.  Pat O’Hara is Professor of Chemistry at Amherst College, New England. Her husband Richard Blatchly is Professor of Chemistry at Keene State College in New Hampshire. Their sabbatical has involved visiting olive groves in the Mediterranean, South Africa, New Zealand and Australia.

Olives New Zealand wishes to acknowledge appreciation of the hosting of Pat and Richard by these processors, especially as many are already involved in processing 2015 harvests. Pat and Richard enjoyed their visits and said these have added to their knowledge of the international olive industry. While in Wairarapa and Auckland they had the chance to meet with local growers and this was also worthwhile from their perspective. Thanks to Bruce and Mary McCallum and Ross and Margaret Legh for hosting these meetings and accommodating Pat and Richard.

Pictured above are Pat and Richard with Bill Hey at The Olive Press, Wairarapa.

Google Maps is not yet showing Arbor Place, but this shows the approximate location. 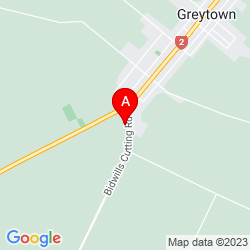